This is one of the tiniest pieces of art ever made – an image of the sun made from 20,000 microscopic particles of gold.

The recreation of Robert Fludd’s 17th century drawing of the Sun – the alchemists’ symbol for gold – is shown being created by precisely placing 20,000 gold particles, each about 60 nanometers in diameter, etched on a silicon chip “wafer”.(60 nanometers is 60 billionths of a meter; a human hair is about 80,000 nanometers wide.)

This is not only a piece of art but it is also micro-engineering. It is nanotechnology racing ahead. This creation means 2 things:-1st this is a new nano “printing” technique and 2nd the scientists believe this will lead to breakthroughs in ultra-miniature; ultra-tiny chips, lenses, and biosensors.

IBM researchers in collaboration with scientists from the ETH Zurich have achieved this breakthrough.

The achievement, published in the September issue of the journal Nature Nanotechnology, offers a promising and powerful new tool for use in a wide range of fields and industries such as biomedicine, electronics and IT . 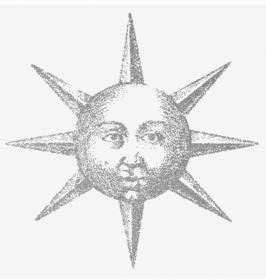 Today’s most advanced microprocessors already involve components even smaller than 60 nanometers. But the new research is different because the tiny particles were manipulated directly into their desired places with a method that could be economically reproduced in other nano-scale construction projects, even those with features as small as 2 nanometers.(beyond 2 nanometers is impossible to go at present)

The IBM scientists believe this method could be used for mass production, more efficiently and at a lower cost to fabricate atomic scale nanowires, ultra tiny lenses for optics and biosensors for healthcare inside nanoscale circuits of the future. According to them this could be achieved in 3-5 years time.

Nanoparticles can also interact with light. With the new method, optical materials with new properties could be printed, for example, for use in optoelectronic devices. So-called “metamaterials” could be created in which the printed structures are as small as the wavelength of the light.

The traditional printing method known as “gravure printing”, where an image is etched on the surface of a metal plate, the etched area is filled with ink, then the plate is rotated on a cylinder that transfers the image to paper or other material. This method allows for features as small as 10,000 nanometers, far too big for use in electronics. IBM’s novel new nano printing method uses a self-assembly process to control the arrangement of tiny nanoparticles, in this case 20,000 gold particles, each about 60 nanometers in diameter. The gold nanoparticles are swept across a surface and convective forces in the liquid push the particles into grooves in the surface, forming nanostructures with a well-defined geometry.

This is a signal that tells : in ultra small worlds, nanotech race is on.